“It’s not just the cars, it’s the people”

A couple of months ago I found myself contorting my arm up inside the rear end of my Boxster looking for a hose clamp that was more elusive than the Loch Ness Monster and couldn't be better protected by the Secret Service. I had oil in my eyes, coolant all over my back and because of the awkward angle of attack my arm quickly went numb from the shoulder down. Had I been alone I most certainly would have quit, punctuating the project with a few, choice exclamatory expletives... but, thankfully, I wasn't alone.

I can't say that my arm had to be twisted as much as during that repair job but I wouldn't have become a PCA member in the first place without being exposed to the infectious passion and encouragement of my father-in-law, Bren Hirschberg. He's the most avid and accomplished gearhead I know and over the past couple decades has managed to rub a little Porsche grease off onto me.

I bought my 2000 Boxster S a couple of years ago through a friend of his. Let's just say they made me an offer I couldn't refuse. I immediately fell in love with the machine and it didn't take long to get my hands dirty. Within a couple of months Bren and I went through the standard maintenance: change the oil, filters, etc. Emboldened by my early success I floated the idea of replacing the soft top, as the rear plastic window had started to crack at the edges. Never one to back down from a challenge (nor eager to diminish my enthusiasm) Bren, with a wary grin, agreed to try it.


He didn't neglect, however, to bring in reinforcements. Somehow he managed to convince Tim Hagner to join us in the endeavor. If this is an obligation of the club president Tim was gracious enough not to bring it up even once during the grueling process. All in all, the three of us spent two solid days fitting the new top, a process that only Jayne Mansfield's seamstress could truly appreciate. But it looked nearly as good when we were done and today I couldn't be more grateful to Tim and Bren.


During that process Tim warned me a few times that my next project would likely be replacing the coolant tank as that was a common failure in Boxsters of that vintage. I took that to mean he was volunteering for the job and sure enough I called within a couple of months. Tim gamely informed me he had performed the job more than once already and owned the special tool required to get it done. 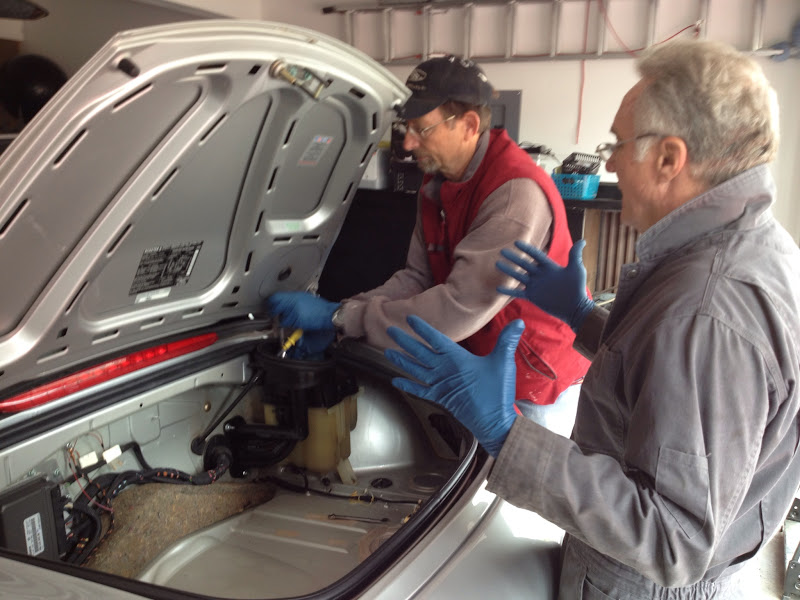 So there I was, my arm numb after playing Porsche proctologist, ready and willing to let the patient die. As I said before, without Bren and Tim's help I would have pulled the plug. They were there, however, to keep the project from flatlining. My Boxster now has a brand new coolant reservoir and once again runs like a charm. And I know now that PCA's motto is more than just a motto.