This is late and I apologize. So many of you wait for the new month and the new “Ramblings”, I’ve let you down. Ok, so Jesse was the only one to ask where my article was. Well, really he didn’t ask, either. When I told him I’ll be late but will write ”Ramblings” he said, “I know you’ve been busy”. I was encouraged.

As you might know, the Presidential Palace has now moved and is fully functional. Whew, glad that’s done!The Porsche Parade in Salt Lake City has come and gone, four cars from High Desert in attendance, and we had a fun time. An article for the Parade is forth coming. I “found” a great Porsche road on the way home with long straights and fun twisties. Hwy 140 from Oregon to Nevada, I’m going back! 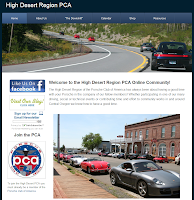 Big news!!! At the Parade our Web Site and our web Master, Jesse Felder, won second place for a region with 100-300 members. Way to go, Jesse! Plan on being at the next meeting, Aug. 7th, where we will present the award to Jesse.


PCA continues to grow, and so does our region. We are at the 150 primary member mark. Thanks for joining the club and please come join us at the meetings and events. “”It’s not just the cars, it’s the people” is so true. The Porsche Club of America is one of the few prestige marque clubs with increasing membership. While we’re increasing at nearly 200 members per month, other clubs are barely holding ground or are declining. In general, PCA membership has been rising consistently all year with 1,199 new members so far in 2012. Current year to date membership is 62,187.


I always find it interesting to watch people to see who really looks at our Porsches when we drive by. The most stares and looks of “Wow” come from young men, 13 - 20 years old, by my guess. The July 4th parade in Redmond was no different. They know their Porsches! I overheard some conversations with thing like “Is that one a turbo coming...” I still remember the sales brochures I read as a young man with the “T’s”, “S’s” and Targa explained. And I dreamed... Some things never change and I look forward to all those new PCA members in years to come.