Some of you may know that my friend Jim and I have rented motorcycles and are doing a two week tour of Europe. It started really well. We got to our hotel in Munich and saw two BMW's parked in the parking lot. We thought there must be some other motorcycle guys at the hotel. Wrong - the rental company delivered the bikes two days early!

We spent the next day getting over jet lag in Munich. We rented some bicycles to see the sights. Guys and girls surfing on the river coming from the Alps, wire haired wiener dogs and old naked guys in the park. So the next day we got on the Autobahn and backroads of Bavaria. We found a church where Mozart studied and went on to the medieval town of Rothenburg ob der Tauber. I had a room reserved so we found our way through the cobblestone streets and accidentally parked in front of the parking garage for our hotel. Things were going too well! 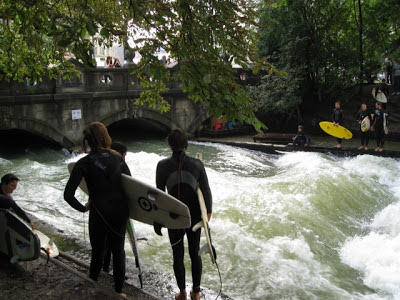 The next morning we decided that the Porsche Museum in Stuttgart would be good. We got on the Autobahn and found a nice pace of about 100 mph in the slow lane. We stopped for a pee break just outside of Stuttgart and the tide turned. My bike wouldn't start. I guess Jim was a Boy Scout. He brought jumper cables. We got my bike going and got to the Porsche Museum. I got on Jim's bike and spent about 3 hours finding a battery at a BMW dealer - not cheap!

We got a cheap hotel in Stuttgart, Porsche museum next day and on the road again. It was a great ride to Obetsdorf in the German Alps. When we stopped to see about a room my bike died again and it was the weekend. Everything closes in Germany on the weekend. To make the best of things, on Saturday we took the gondola to the top of the mountain to watch paragliders launch. On Sunday we did a two up ride through some Alpine valleys in Austria. It was fun but riding two up has its limits. 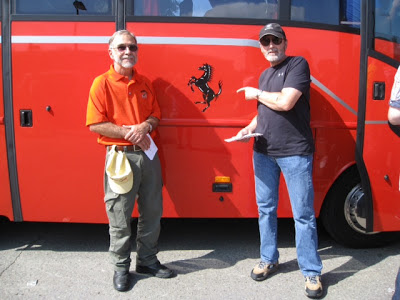 Monday morning we found a little motorcycle repair shop in a village a few kilometers away. They checked the alternator - kaput! We got them to put a full charge on the new battery with the hope we could make it back to Munich. The rental company had a replacement bike available at Munich airport. Half way to Munich my bike completely quit on the autobahn. We switched batteries from Jim's bike and made it the rest of the way. Things were looking up. Next day with an almost new bike we were off to Austria. We had a good ride and found a nice zimmer frei in an Austrian alpine village.

The next day was all rain and wind. We slogged through to Laax, Switzerland. The weather was looking very iffy on the high passes toward France so we diverted to lake Como in Italy because we really didn't want to get stuck on icy roads in Switzerland. We spent a few nights at lago di Garda Italy and did a day trip to see the Ferrari museum. Eventually, we made it home in one piece with only a few fumbles.