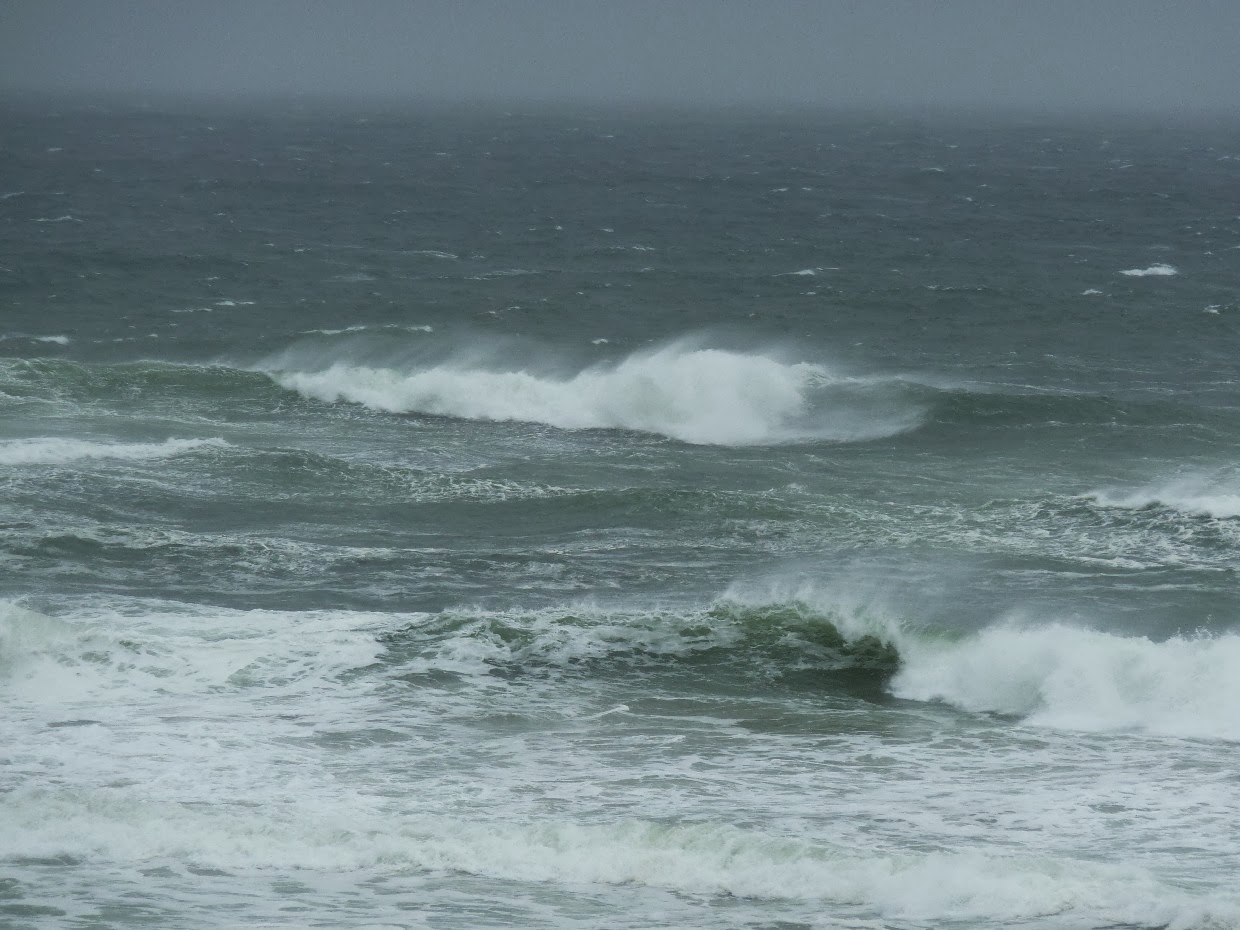 Early Friday morning the group assembled in the Starbucks parking lot, with concerned talk of the stormy weather expected on the coast for the weekend trip.  One brave soul, however, took the optimistic route of dressing in shorts, convinced we would have at least some sunshine during the day.  After everyone collected a “goody bag” put together by the trip organizers, Jennifer Coughlin-Lauray and Pete Olson, fifteen cars headed for the coast behind our fearless leader, Mike Sampson.  On the way to the Tokatee Golf Club,  we encountered an OHP radar trap, but whether by experience or dumb luck, we were all going 55 mph as we paraded by and waved (turns out it was mostly luck, as we had just come up to a slower car!).  By the time we reached the golf club for a break, the sun was shining; everyone was shedding jackets; and everyone’s mood brightened. We arrived in Eugene for a private lunch at the Eugene Country Club (second oldest golf club in Oregon), courtesy of Gail and Linda Overgard, who are members.  Over delicious sandwiches, it was a chance for the trip participants to make introductions and discover new threads of commonality and experience.  While it was sunny before lunch, by the time we left the horizon was getting dark; the wind was blowing down leaves; and reports from the coast were for rain.  Heading for the coast, we encountered our only mechanical “issue”, as Jennifer had to turn back because her car window was stuck down.  With rain on the way, there was no other option- luckily a mechanic was found and she rejoined us in time for dinner. With Pete providing “valet” parking (we had our own paddock area roped off at the Overleaf Lodge) everyone got settled in, and then had time to explore the beach trails; play some games in the Library; or just relax and watch the waves come in.  A catered dinner was held at the lodge, complete with a “roaring” fire log, elegant table decorations, and a commemorative wine glass etched with the High Desert club logo and “2013 Yachats Adventure”- they were put to good use the rest of the trip!  Even after devouring fresh salmon and tender flat iron steak entrees, everyone had room for desert- homemade Marion Berry cobbler (and some, who will remain nameless, had room for seconds it was so good!). 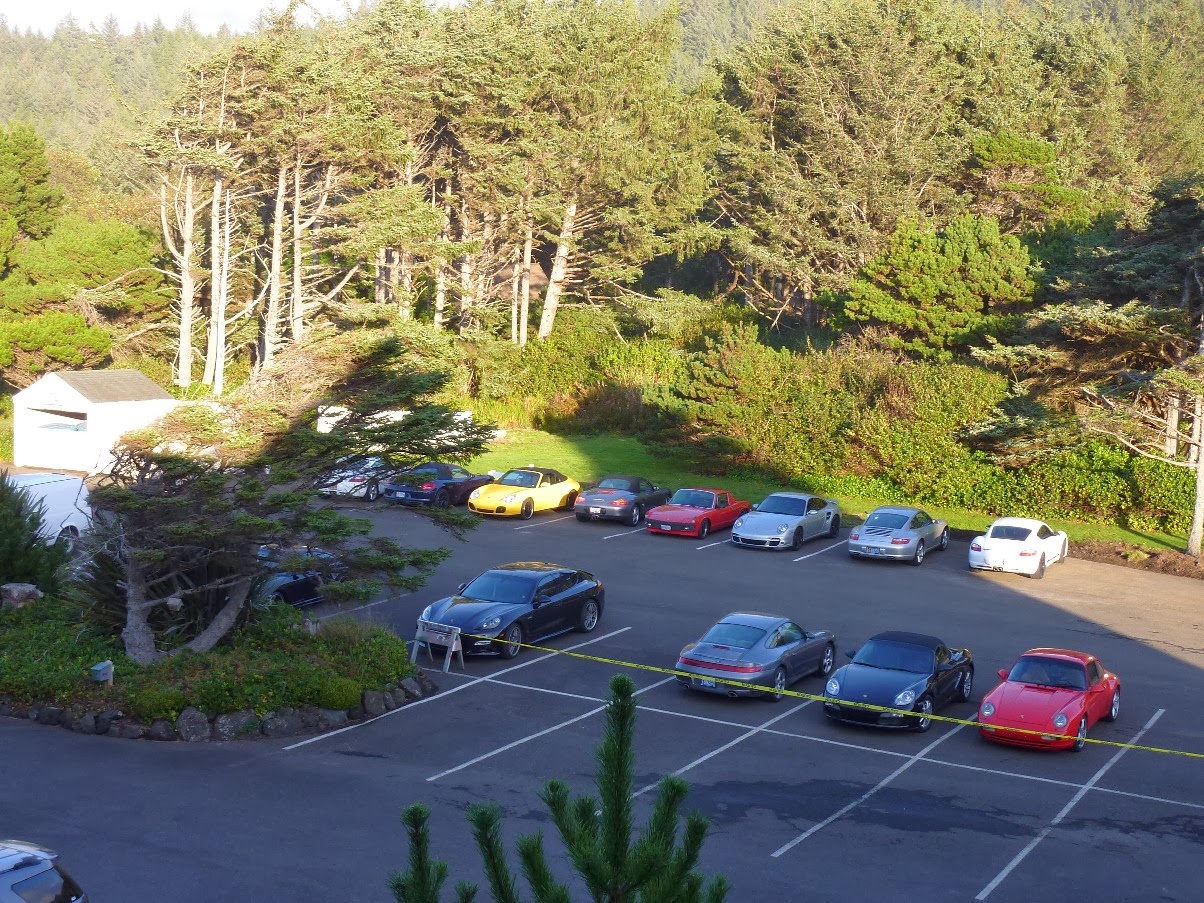 Saturday morning arrived with overcast, but dry conditions.  The “I’m wearing shorts indicator” was dressed and it worked for a second, beautiful day.  A variety of activities were planned, with options for everyone to enjoy the coast.  One group went on an exploration to the North; one group headed South; and others went off to explore the eclectic shops of Nye Beach, or seek out their favorite potter’s store, or hike some of the coast trails.

The southern group started out with a laughter filled lunch at the ONA restaurant (starting to get the theme here?), before heading out to view nature.  Nature didn't disappoint! Devils Churn lived up to its name as the waves rolled into the narrow chasm and crashed against the rocks. Then on to Heceta Head Lighthouse, with a brisk walk up the hill for a guided tour.  At the top of the recently restored 1894 lighthouse we got to view the huge rotating Fresnel lens, which is the most powerful on the coast, shining its light 21 miles out to sea.

Upon leaving the parking lot, the group of three Boxster drivers responded to the requests of a group of young visitors to "put your tops down"- the request was granted, and they even got “kisses”- of the Hershey candy variety.  It was a big hit!

Then we went on to the Cape Perpetua Visitors Center and a hike through the woods to view the largest Spruce tree on the Oregon Coast, along with viewing of mushrooms which we were requested not to pick, since they were being saved for the upcoming "Mushroom Festival".  Reports from other hikers were that they saw more different types of mushrooms than ever, and the largest mushrooms ever.

Last, but not least was a spirited Porsche dash up a fantastic winding road (600 foot elevation in a little over a mile) to the top of Cape Perpetua Lookout.  The grins resulting from the drive were huge, and the views at the top were spectacular!  It was our lucky day, as we spotted several whales playing in the Pacific!  What an afternoon to remember!

The northern group of six cars left the Overleaf Lodge and drove about 40 miles up to Depoe Bay for a tasty lunch and spectacular views from the Tidal Raves restaurant, which overlooks the bay.  Lunch was enjoyed by all, as the sun was shining and the ocean was churning literally under our table!

We then went to the Yaquina Head Lighthouse, which is a quintessential, picturesque lighthouse built in 1813 and is 93 feet tall, with several species of birds right off shore to enjoy.  Our final stop was at Seal Rock, which included Devil’s Punchbowl.  Because the tide was out, the Punchbowl wasn’t as devilish as some had seen it before, but we did get to spectate, and critique, several surfers and kayakers in the water!  The group then returned to Yachats to relax a bit, check out the spa, and prepare for an evening cocktail party.

Following a wine & cheese social hour, the wonderful weather continued through the evening, where we got to enjoy “al fresco” dining on the heated patio of the ONA restaurant.  After a sunny, top-down, wind-in-your-hair day, everyone retired for a good night’s rest, satisfied that we had definitely lucked out with a special day on the coast.

Sunday morning we awoke to stormy seas, 50 mph wind gusts, and sheets of rain blowing sideways.  It was time to choose a route and head for home, content with knowing that our “2013 Yachats Adventure” was a success!