by Hack Heyward
September 7th featured a choice for those of us needing that first Saturday touring fix between a day-long tour to Skamania Lodge or the standard 3 hour Arrive and Drive.  About a dozen cars opted for Skamania Lodge and about 16 cars for the standard tour.  Both groups left the Starbucks parking lot shortly after 9:00 AM heading in the same direction for the first few blocks, which caused a minor level of confusion and entertainment.  Hack Heyward led the standard Arrive and Drive group with Bren Hirschberg as a second Group Leader and Jim Lewis as sweep.  The route went south and west to Cultus Lake by way of Tumalo State Park and Tetherow.

After taking a break at the Cultus Lake boat ramp parking lot, which on this gorgeous morning was practically deserted, the group continued south on the Cascade Lakes Scenic Byway before turning east towards Sunriver.  Highways 42, 4270 and 40 provided hardly any traffic and terrific scenery.  If these weren’t precisely the highways that Stuttgart had in mind when designing our favorite cars, they should have been. 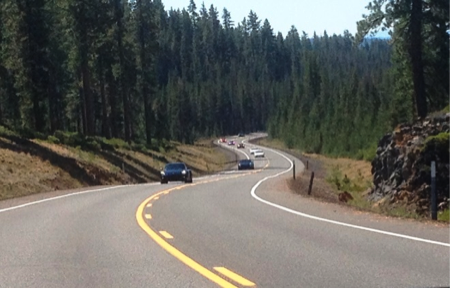 The group turned west again just short of Sunriver onto Highway 45 for a wider and smoother, but no less curvy and just as empty, stretch of highway towards Mt. Bachelor.  After a final run on the Cascade Lakes Scenic Byway back into Bend, several in the group stopped for lunch at Baldy’s Barbecue.