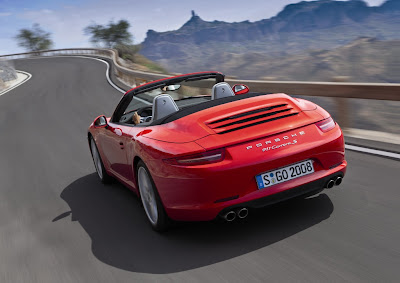 DETROIT – January 9, 2012 – Springtime arrives a little early today at the North American International Auto Show with the introduction of the 2012 Porsche 911 Carrera Cabriolet and Carrera S Cabriolet.
Development of the new, seventh-generation 911 Carrera and Carrera S Coupes began with a new aluminum-steel body; the Cabriolets continue the evolution with the addition of an all-new, unique top that retains the characteristic 911 coupe roof line. The intelligent lightweight design makes use of magnesium for weight reduction, improved performance and lower fuel consumption. As with the new 911 coupe, Porsche has managed to make the new Cabriolet models up to 132 pounds lighter than their predecessors.
By completely redesigning the convertible top for the new 911 Carrera models, Porsche engineers created a flexible roof comprised of a heated glass rear window with three integrated top elements. Comprised of magnesium bows covered in fabric, they make the convertible top very stable and particularly light.
A water channel on the convertible top helps keep rainwater from dropping into the entry when opening the doors. Actuated by a button on the center console or by the vehicle key the top and opens or closes in approximately 13 seconds, at speeds over 30 mph.
“The USA is and remains an important market for Porsche with good growth prospects,” said Bernhard Maier, Porsche AG Board of Management Member for Sales and Marketing. “Detroit was deliberately chosen for the world premiere of the new 911 Cabrio because the USA is far and away our largest 911 Cabrio market.” The Coupé variant of the sports car classic will be available in the USA starting in February 2012 with the Cabriolet following a few months later, providing a fresh impetus.
The two new Cabriolets feature the same engine as its Carrera Coupe counterpart. The rear of the 911 Carrera Cabrio houses a 3.4-liter flat six-cylinder engine generating 350 horsepower (hp) (257 kW) driving the rear wheels through a seven-gear manual transmission. The open-top Carrera S comes with a 3.8-liter flat six-cylinder engine developing 400 hp (294 kW) and also has a standard seven-gear manual transmission. The Cabriolets have the Porsche Doppelkupplungsgetriebe (PDK) available as an option, helping to deliver even lower fuel consumption and shorter acceleration times.
The new, 2012 911 Carrera Cabriolet will sprint to 60 mph in as little as 4.4 seconds with the optional PDK, accelerating on to its top-track-speed of 176 mph. The 911 Carrera S Cabriolet with PDK will perform the same deeds in as little as 4.1 seconds and reaches a top-track-speed of 185 mph.
With a 3.9-inch longer wheelbase over the outgoing model, a wider front track and the new electro-mechanical power steering, the new Cabriolets offer even sportier driving characteristics, greater precision and agility. Depending on model, there are other standard and optional active control systems available to further enhance the driving dynamics.
The 911 Carrera Cabriolets will be available later in the spring of 2012. The new 2012 911 Carrera Cabriolet will have a base MSRP of $93,700, while the 2012 911 Carrera S Cabriolet base MSRP will be $103,800 (excluding destination).
Panamera GTS
The Panamera GTS is the purest expression of a sports sedan in the Porsche family with a clear focus on performance. The new Panamera GTS is based on the Panamera 4S and includes more power, upgraded brakes and a body lowered by ten millimeters with new sportier chassis tuning coupled to air suspension and Porsche Active Suspension Management (PASM). These technical modifications make the Panamera model even more capable of cutting it on the race track without sacrificing practicality. The sportiest of all Panamera models also conveys this to occupants and the outside world by its striking sound. In terms of looks, the new Panamera GTS includes distinctive design features at the front, side and rear as well as black highlights. The interior is also tailored to its sporty personality with adaptive sports seats, SportDesign steering wheel with shift paddles and exclusive GTS leather interior with Alcantara surfaces.
The Panamera GTS powered by a modified 4.8-liter naturally aspirated V8 engine, delivering 430 hp at 6,700 rpm, increasing the output over the Panamera S/4S by 30 hp. The maximum torque also increases by comparison, from 369 to 384 lb. ft. At the push of a button, thanks to the standard Sport Chrono package, the 7-speed Porsche Doppelkupplungsgetriebe (PDK) transmission transmits the engine output to the all-wheel drive system without interruption to the power flow. This collaboration enables the Panamera GTS to sprint to 60 mph in 4.3 seconds, accelerating on to its top track speed of 178 mph.
The GTS is equipped with the latest Porsche dynamic driving dynamic control systems, including adaptive air suspension including Porsche Active Suspension Management (PASM). This system constantly calibrates settings to suit specific driving challenges, from regulating leveling, height and spring rate to electronic damping. With the suspension set at “Normal,” the GTS sits an aggressive ten millimeters lower than any other Panamera model.
The distinctive sound of a Porsche engine is music to any enthusiasts’ ears, and the Panamera GTS adds a new dimension for appreciating the GTS exhaust notes at the push of a button. The Porsche Sound Symposer is an acoustic channel that picks up the intake vibrations between the throttle valve and the air filter, transmitting them as engine sound via a membrane into the A-pillar.
With the option of infusing the GTS cabin with the sound of a race car, it’s only fitting that interior appointments reinforce the car’s competitive DNA. The GTS comes with a full range of luxury and high-performance appointments, including a standard sport steering wheel with shift paddles and 18-way adjustable sport seats.
The 2013 Panamera GTS base MSRP will be $109,900 (excluding destination) when it goes on--sale later in 2012.