Porsche Parades are always a fun time. What’s not to like spending a week with 1,500 of your closest Porsche friends? This year's Parade at Salt Lake City (SLC) was no exception.

On July 7th, three Porsches from the High Desert Region met at the A & D to say “hi” and “bye” to all and started our journey east to SLC. Roger and Mary Sanders, Ed and Evelyn Chernoff and Tim and Sue Hagner comprised our three car parade. Pete Olson also attended, choosing to drive a different route. Across Central Oregon to Boise was our first day. We motored across on Hwy 26 out of Prineville. Only one local Sheriff was spotted in an all black and unmarked P/U truck, sitting on the side of the road, with radar, trying his best to look like a rancher! Thanks to Ed and his Passport! Lunch was in John Day. We completed our first leg arriving in Boise at the Hotel 43 at 4:00 pm after an uneventful and very enjoyable drive.
That evening Rex Chandler (Pres. Of Silver Sage Region) hosted a Champagne social for all the out of town Parade goers. We had 30+ PCA’ers from High Desert, Vancouver Island and Pacific Northwest regions in attendance. Afterward we broke into smaller groups and headed out to dinner.
Sunday to SLC in a Parade of over 25 Porsches from Boise. That’s not counting the Porsches that passed us or those we passed along the way, all headed to Parade. We had a lunch stop along the way with the box lunch we had courtesy of Rex Chandler. “Thank you” to Rex and the group in Silver Sage, they really did a great job of making all of us feel welcomed!
Did you know there were over six hundred cars and 1,500 contestants registered for this years Parade?!
Sunday night was the “Welcome Party” and the Parade was off and running. Concours d’Elegance and Porsche Coral on Monday morning, staged around the state capitol, got us going. 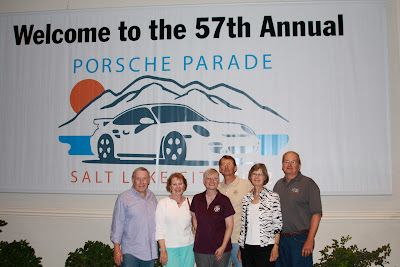 There where driving tours, rallies, an auto-x, banquets, awards, special guest speakers, the Goodie Store, tech sessions, tech quizzes, wine tasting, beer tasting, vendor booths, door prizes and Porsches, yes the cars and the persons: Hans Peter (33rd Parade), Wolfgang (16th Parade) and the grandson Ferdinand (don’t know how many Parades) were also in attendance.
Sue and I ran the TSD (Time Speed Distance) Rally and finished 14 out of 64 in our class. If you would like to know how a TSD works, ask me and I’ll be glad to explain. I competed in the Auto-X and didn’t think so many would drive to the Parade and bring race tires! Think it’s back to the stock class next time.
The winner of the longest drive to Parade award went to a couple that drove from Newfoundland! It was over 3,400 miles one-way.
The Parade is what you make it. For us it’s fun, busy, competitive and social. We have been to five now over the years and will continue to attend. I don’t do the Parade justice here. Read the forthcoming article in Pano to get all the details.
Pete came home from Parade with more Porsches than he left with! Seems to be a new theme for club tours.
Next year’s Parade (2013) is in Travers City, Michigan. Might be further than we want to drive but 2014’s Parade is in Monterey, CA. We’ll be there; will you?