Nine Porsches from the High Desert Porsche Club rolled into the Griot's Garage parking lot on Friday October 19th after the seven hour drive from Bend via Multnomah Falls and more than a few great roads.  We were given a lengthy demonstration on the car products for meticulous people and than given a chance to purchase many of the products we had seen in the demonstration.  Several large shopping  bags were seen being carefully put away in the Porsches along with many smiling faces.
With our wallets emptied we made our way to our weekend home at the Marriott Courtyard in downtown Tacoma.   They had saved parking spaces for us in the front of the Motel to accommodate our Porsches while we spent the weekend visiting Tacoma.  We would not have to drive the cars again until we departed on Sunday. 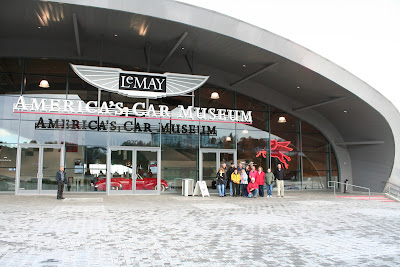 Friday evening we enjoyed tasty Asian inspired cuisine at Indochine Restuarant, just a short walk from the hotel. Saturday morning after a hearty breakfast we boarded the light rail train in front of the Marriott and made our way over to the LeMay Car Museum also known as America's Car Museum.  We were greeted by a former Bend PCA member, Thomas Robertson who was one of the docents for the museum and then we began a four floor tour of over 400 cars on display.  The cars ranged from Avantis to Plymouths and everything in between. Harold LeMay had collected 4000 cars over his lifetime and this was just part of his collection that was now on display at the newly opened museum.  We learned that each car had a story and our docents were very good about answering our questions and explaining the cars history.  We ate our lunch at the museum and then continued to view the unending examples of wheeled transportation. 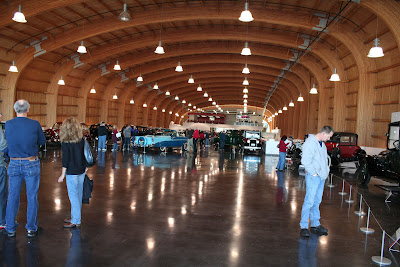 Mid-afternoon found us riding the light rail back to the Courtyard Marriott and then a short walk to the Museum of Glass across the Chihuly Bridge of Glass and into the glass foundry for a display of glass blowing techniques.  It was warm and dark in the foundry and many a nap was taken as we recovered from the busy day.  A two hour tutorial on creating a beautiful vase was quickly ended when the nearly finished art was dropped on the floor with a loud gasp from the audience. 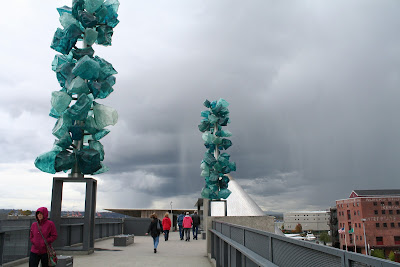 Our evening meal was at Paddy Coyne's Restaurant, another short walk from our hotel. Irish food and beer were the order of the night and laughter filled the room as we spoke of the many different  events we had witnessed during our visit to the two very different museums.
Sunday morning we were packed and ready to head back to Bend but not before a stop at the new race track at Ridge Motorsports Park in Shelton.  We were met by the owner Rod Powell who explained how he had wanted to pursue his passion of racing and built his own racetrack in the process. We were allowed three laps around the track with an invitation to come on back next year when the season opens for some more serious fun.
Half the group headed south and the other half headed north and the weekend had soon come to an end with another HDPCA tour in the record books. Thanks to all that made the trip for a fun and enjoyable weekend.